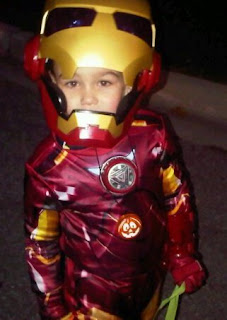 Someone asked me today "How do you do Halloween with Jonathan?"  To which I responded "Well, first we find a really cool costume, then we dress him up and give him a bag.  Finally we send him running house to house screaming 'trick or treat'..."  And I was once again labeled a 'smart-ass'.  Fact of the matter is, we all know it looks a lot easier than it is.
Factor in assumed activity to the dinner bolus, set temp-basal, check BG often, have juice boxes on hand, and try to keep up.  I've never been a much of a juggler in a practical sense, but it kind felt like we were marching down the street with our balls in the air.
I'd like to consider myself to be fairly non-judgmental, and I honestly don't remember having an opinion on diabetes and Halloween before, but I can imagine there of plenty of people out there who would shake their head at the notion of a diabetic child going trick-or-treating, and maybe even a few who would question our fitness as parents for allowing such an activity.  The simple matter of fact though, is that Halloween is no different for a diabetic child as it is for any other (at least not in their minds) and the irony of it is that most, if not all of our kids, actually are healthier trick-or-treaters than some of the other kids because they are typically more responsible (ok, with some guidance) with their sugary treats and don't gorge themselves on piles at a time (like I did when I was a kid).  He, and his sister, each get one - occasionally two treats per day as desserts after a meal (usually lunch - sometimes dinner), and his is factored into his carb count.
Halloween this year, that is the night of, wasn't as big a deal D-wise as some may think.  Actually, there was no candy consumed by either child last night.  In D terms it was no different than a long after dinner walk with some extra fun thrown in.  I really don't want to over-simplify it (a 3.8 / 68 half way through was a big F-me moment), but the things is as much as it's harder than some may think, it's more doable than they might imagine.
The thing that amazes me though about Jonathan is, over the past year had change, when special treats come up he doesn't put up too much of a fuss if his sugar is high and he has to wait until later.  He's shocked the hell out of both his teachers with how good he is about it.  Not just Halloween, but birthday cupcakes, craft snacks, and a number of other seasonal items.  Sometime he's not too high and there's no concern, but if he's in the 20's (>360) the teacher feels uncomfortable about sending him up higher, and really she's right.  As much as I don't want him to be excluded from special activities, he's better to wait until later for that special treat and have something more sensible at the time.... and he never puts up a fuss about it.
Calm, cool, collected... and great tech for battling evil... he is a real Iron Man.
Posted by Marc at 11/01/2010 07:42:00 PM 3 comments: