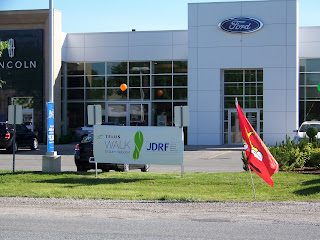 Well, it's been almost a week since the accident.  It's been a crazy week.  Jonathan's day time numbers have been good, but he goes high at night inexplicably.  We had to replace the Malibu, so we got the Caravan we were planning on getting in a couple years and we pick it up Friday - and not a moment too soon for my PT Cruiser loaner hating wife.  Jonathan is doing well otherwise however he did not enjoy our little game of "remove the stitches" at the doctors office yesterday.
This past Saturday was a beautiful day and we finally pulled off our JDRF car wash - I have the bright red sun burn to prove it.  We did alright.  We had a fair bit of traffic however, we actually pulled in more donations three weeks earlier in the rain; mostly thanks to family.
I've been spending the last few evenings plugging away at my calling list for the walk.  I was a little hesitant about calling complete strangers to get them registered for the walk and feared I'd be treated like a telemarketer but out of about 60 or so calls, only one person seemed mildly upset that I rang his phone.  It's actually been a great experience.  Most everyone has been really nice and some have chatted up a storm.  It was kind of like the DOC, but talking instead of typing.  There were a few moms and dads that I spoke with for upwards of a half an hour, but there was one that really got to me.  The last call on the last list was to a mother of a 4 year old boy that was diagnosed about a year ago.  She has not previously participated in a walk but had contacted our local JDRF office about other matters.  She told me that she really wants to bring her son out and have a great experience with him, but she is still having a really hard time dealing with his diagnosis, emotionally.  I could tell from the sound in her voice that she was on the verge of crying the whole time and it reminded me of the fine line that I walk.  I can get pretty worked up rather easily and I tip-toe around a precipice when it comes to the kids and "bad stuff".
Honestly, judging from the name on the list, I was expecting an eastern European lady that I had a 50/50 chance of understanding, but instead when she was handed the phone I heard a soft sweet voice that came through crystal clear.  I was totally not expecting to hear what she had to tell me, but it was quite evident that this poor lady had been mourning her son's diagnosis for the last year and from all indications has been facing this alone.  It made me realize, or re-realize just how lucky we've been.  Our supporters number now in the dozens, more than a dozen dozens, in fact if I counted every person that has at least shared an encouraging word or offered of themselves to help improve our lives I'd be here a long time counting.  But it seems that this mother has had virtually no one.
I did the only thing I could do.  I gave her my phone number and told her she could call me anytime.  Her son is a little younger than Jonathan and I suggested that we get them together to play and share a meal so that they both know that they are not alone.  And I offered to have our community outreach coordinator call her and let her know about events in our area that type 1 families would be gathering at.  That's about all I could do.  It's saddening to be so clearly reminded that not everyone is as blessed as we are to have an awesome support network, but at the same time it reminds me how thankful I am for the DOC and all our supporters.  Thank you everyone!
Posted by Marc at 6/01/2010 08:59:00 PM 5 comments: