Usually I see the light, sometimes though the dark 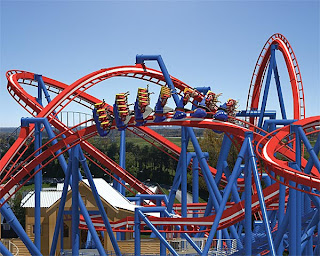 Ya know, the mind is a funny thing.  It sometimes does some weird things, things to protect itself I guess; things done without a conscious thought.  I came across a couple videos this past weekend and posted them in the "About Diabetes" section of the "Top Vids" tab.  They really got me thinking.
I came to the conclusion that I've become somewhat de-sensitized to D.  I know I've never lost sight of the fact that we need to keep Jonathan in his "Goldilocks Zone" and that's really important - life and death important, but after watching those two videos I realized that things aren't as great as they seem to be.  Yeah, Jonathan has had some respectable numbers and is trucking along quite well, but some how in dealing with the day to day I feel like I've lost sight of the bigger picture - he has a disease that he may very well have for the rest of his life and to make matters worse, it could be that very disease that will be his end.
I certainly hope, and I pray every night that it won't be the case, but that dark reality does loom over us.  I guess the thin silver lining of that cloud is that it reinforces my drive to do everything I can to help make a difference.  I can't think of anything I wouldn't do for my son (or daughter for that matter) - if it were as simple as swapping pancreas' this would already be over for him.
Aside from what the doctors have been able to tell us about theories and what we've read on our own, I have no idea how or why Jonathan got Type 1 Diabetes.  I know he certainly didn't do anything to deserve it - and neither sis anyone else that has it.  I can't define it any way other than it's a horrible truth that we didn't miss out on.  I know it's reasonably possible that Jonathan will live a long and healthy life and staying on the straight and narrow could dodge the pitfalls of this disease, but it's going to be a long and sometimes really hard road.  If, God willing, he makes to the same point that his great-grandfather is at right now, he's 1/113th of the way [(91years old - 4at Dx)*12 months / 9.25 months since Dx].
If any of my Facebook friends have looked closely at my profile, they will have noticed the one thing that I believe more than anything else about family: "Our children are our greatest legacy we leave to this world. It is not only our privilege, but our responsibility to ensure their future success."  When I wrote that, I had no idea where we would be today, I certainly hadn't guessed that he'd have D dogging him through life.
I try to stay positive that things will be alright.  I try to stay optimistic that "the cure is five years away" will soon read "four" and then "three" and eventually "now".  I try to keep a brave face when he's looking, even though deep down inside I know that it's far more dangerous than he realizes.  I want him to grow up and not be held back by this burden.  Although he's young and will likely change his mind several dozen times, I hope he does see his current dream through and become a doctor.  I think if he were the one to eventually find a cure (yes even insulin was born in Canada) I would probably explode, but I hope someone beats him to it.
At the end of the day, it is what it is.  Even if I could go back in time, I'd have no idea how to change it.  It makes me wonder if parents of children with diseases and other issues aside from diabetes feel the exact same way.  I honestly can't think of another disease that requires so much monitoring and so much therapy and has every day tip-toeing on a tightrope.  I've managed to somehow convince myself of an illusion that everything is OK and we're really in a good spot all in all, but the reality is that we walk a narrow winding road and the edge is closer than it appears.  Maybe when I wake up tomorrow that line will be a little blurrier again.
Posted by Marc at 6/08/2010 08:21:00 PM 3 comments: