Am I not as afraid as I sould be? 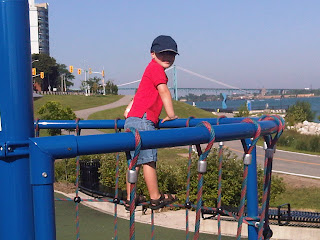 The question crossed my mind the other day and it struck me as odd that I'm not as afraid of this as maybe I ought to be.
A good portion of my friends, co-workers, and people that I interact with every day have children.  Even a large chunk of those without children of their own have a niece or nephew that they are close to.  Inevitably, at some point or another, the topic of diabetes comes up.  Maybe because it has such a prominent place in our lives, maybe it's because I love telling anyone who will listen so that word gets around and hopefully that leads to support of groups like JDRF, or maybe it's both.  When you tall a parent who knows little to nothing about Type 1 Diabetes what can happen if it's not properly managed and they realize a potential result is every parents worst nightmare - the look on their faces is sometimes staggering.
This morning I was having a conversation with a mother that garnered such a reaction that I was taken aback and realized that maybe I don't "fear" diabetes as much as I should.  I know very well what can happen if blood sugars are left to run high long-term; and what can happen if they dip too low.  Catching Jonathan at 2.8s (50) and 3.2s (58) a few times over the past weeks (even at 2 hours post injection when he still has active insulin), I know he was potentially headed towards a dangerous level.  I even shocked myself last Saturday when I testing Jonathan out of suspicion and found one of those 2.8s, calmly walked in the house, grabbed a cup of juice and gave it to him without even thinking about what had to be done, just doing it.
Then it hit me.  As weird as I feel about not being afraid, I have to think that it's likely because I've spent the last almost-eleven months living with this, that I've tried to read and learn as much as I possibly can, because I have open and frank conversations with medical professionals, parents and others with the disease, and that we have a fairly good handle on things with Jonathan in terms of monitoring and managing.  I would by no means profess to be even remotely an expert, but I do feel that I know my enemy and I have a healthy respect for it.  That being said, I don't want to come of sounding cocky, my confidence is never 100%, but it's not non-existent.
My wife has concluded that I have OCD.  I really don't think that I'm obsessive about diabetes, but I am always watching, testing, and calculating (carbs and plans).  I would have to say that diabetes pops into my head more than sex, beer and tv combined.  Despite my wife's diagnosis, I think I have to sum it up that I traded fear for knowledge and involvement.  I'll admit, I'm a bit of a control freak too, so that probably factors in as well.
What do I do when things get tense?  I burn through test strips like they were free (I love Green Shield for that one).  I had a co-worker recently surpried to learn that I'm not an insomniac, some nights I get up every hour to check blood sugar.  A double-digit test day is not unheard of.  One of the ironies is, Jonathan's best nights are often my worst nights.  On more than on occasion he has been about 5.5-6.0 (99-108) straight through the night, which is great for him, but without knowing what is little body is going to do next I can't let hours pass and hope he doesn't drop 4 points in a couple hours.  Maybe a CGM would help, but then again I would probably lay there just waiting for the alarm (besides - not covered.... Damn Green Shield).
As I ramble on here I realize that some may argue it's really fear that compels me to do what I do.  I guess I don't really know; six of one, half dozen of the other?  What I do know though is that compared to the trembling puddle I was less than a year ago, I feel that I'm on more solid ground now.  Of course there are bad days, and there will almost certainly be days worse than anything we've seen yet to come, but not cowering in a corner has made a huge difference.  Our clinic, our friends, our JDRF community and the access I've been afforded to the inner working of that organization have all made such a huge impact in my life and in turn in Jonathans.  If I had one piece of advice for any newly diagnosed person or family it would be this: learn, learn lots.
Jonathan and his sister as our real top prioirties in life so it goes without question that whatever needs to be done is done.  Even if it means I look like crap in the morning, I really don't care, so long as he gets to stay on top of the world.  Maybe somewhere in here I answered my own question.  Maybe I'm so deep in there there's just no time for fear, maybe that's it.  Whatever it is, and even if I never answer that question, so long as we can keep racking up small victories I'll be happy.
Posted by Marc at 7/21/2010 07:57:00 PM 4 comments: