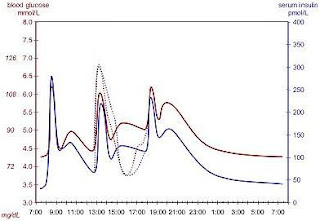 I've said it before and I'll say it again - anybody that knows me, knows that I love numbers.  Data is information and information is power.  No, I'm not a maniacal leader of a group bent on world domination - just someone who's mind is more at ease when things can be quantified and understood (and as I just typed that I think to myself, what in my life is less quantifiable and understandable than Diabetes… damn!)
Nevertheless, we do our best to manage this using the numbers.  The BG readings, the carb counts, the dosing ratios, all go together to try and keep Jonathan in a safe and healthy place.  We've been having a pretty good run lately.  Jonathan's average for the last 7 days has been 8.8 mmol/L (158mg/dL) which roughly translates to an A1c of 6.6%.  His 90 day average is about 12.2 / 8.3%.  Our goal going into our May 18th appointment is 8.5%, so we're on track, I think.
Some individuals have recommended that we not react emotionally (at least not outwardly) to any numbers.  They say that while it's nice to celebrate the good days, it's potentially dangerous to berate the not-so-good days and even if we just stay cool on the less than good days, a lack of celebration will be noticed.  They've suggested that some people, especially children, tend to translate a "bad day" into a sense of personal failure in a way that can be demoralizing and in the long term self-destructive.
Something that took me a long time to learn, but that I hope to instill in my children as early in life as possible, is that failure most often does not equate to self-worth.  Many great people have failed at a great many things, but that never made them any less great.  It took me about 30 years to figure out that the saying "sometimes you win and sometime you lose" is really misleading.  The truth of the matter is, sometimes you win and sometimes you learn - the only real loss is when you don't learn from not achieving your goal.
So back to the last week.  We've been seeing great single to low double digit numbers (108-144 range for my American friends).  We've even been seeing fasting numbers in the 3.5-4.5 (64-81) range.  Admittedly, this is on the tight side for a young kid and represents the very lower edge of his target range, but the consistency has been amazing aside from a few minor hiccups.  I have been able to come up with two reasons for this: Secondly - As we all do, we've done our best to tweak his doses, monitor his trends and maintain a healthy and balanced diet.  During the wild times, we catch out-of-rangers and respond quickly.  We test often and analyze our data.  During the "stable" times, we keep up with what seems to be working and go from there.  Firstly - Sheer dumb luck…  I think we all know that the D has a mind of it's own and a lot of the time does what it will regardless of our plans, but lately we're winning.
We're winning and we're not hiding the fact that we're happy about it.  We know we will struggle again and the numbers will creep up, but when that happens it doesn't mean we've failed, it means we are learning something and through that leaning we will have knowledge, and with that knowledge we will have power, power over D.
Posted by Marc at 5/06/2010 07:33:00 PM 2 comments: