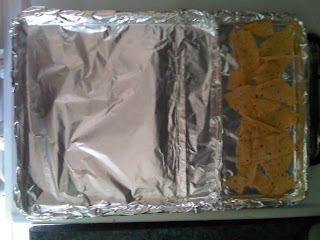 I am a fan of things strange and bizarre.  One of my favorite people in history is Nikola Tesla.  I came across an article about him and some of his work, during which I stumbled upon a concept previously unknown to me - A Columbus Egg.

I thought this was a totally cool and strange thing, surely I would have to some day write about my own Columbus Egg, even a little one.  I figured something would pop up down the road, but lo and behold, it happened today.

Sometimes I write about the little things that really get to me (you may remember the nachos).  I have been at a loss to solve this problem, but all of a sudden it hit me and I felt like a moron for not thinking of it before...  In my never ending quest to keep things simple, I line the cookie sheet with foil so that I don't have a lot of clean up after.  Well shoot, why not just pinch the liner to form a little wall across the tray?  In this way I can ensure that Jonathan gets exactly the amount of carbs that I planned for him. 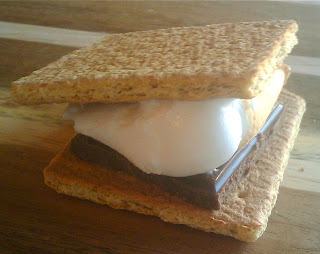 At the risk of sounding like a broken record, here I go again… Let the kid be a kid!
Sometimes it really is the simple things in life that make the difference, like participating in group craft/snack at Latchkey. The theme this week has been "Camping". Their stories, activities, and crafts have centered on camping related concepts. Today? S'mores.
I actually just found out that today's activity/snack combo is yummy gooey s'mores. I found out because a lady from the Latchkey program called me to see if we could work out a way for Jonathan to participate. Have I ever mentioned that I really love my team?
So, over the phone she read off nutritional labels to me: graham crackers (2) = 8g carb/4g fiber = 4gNet, marshmallow (1 large) = 24g carb/0g fiber = 24gNet, and chocolate chips (1 tsp.) = 10g carb/>1g fiber = ~10gNet. Ok, 38g, 38 is not going to work, that is at least 20g more than his typical snack, but well make this work… Two graham crackers, a half a marshmallow, and 4-5 chocolate chips? ~18-19ish. It's warm outside and they will be playing for the afternoon… 18ish is good. Sweet, he's in!
I'm so glad that they not only care enough to work with us to learn about him and Diabetes and are willing to check him whenever we need, but they would also go the extra mile to make sure that he is never excluded because he needs some extra consideration. I cautioned her that with it being significantly warmer than we expected (low to mid 80's) this afternoon and mom having dressed him in jeans and a long-sleeve T, his blood sugar might want to dip and they should feel free to test him.
I guess in hindsight I could have just waited and seen if sun and s'more would cancel each other out, but it seemed like a good compromise and was quickly dealt with, and it's little wins like this that help get me through the days.
Posted by Marc at 5/20/2010 05:01:00 PM 3 comments:

Almost... but not quite 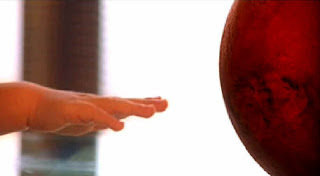 I know I say I try not to get hung up on the numbers, but I'll admit it, I was a little disappointed today.
Three months ago Jonathan hit the A1c target of 9.0% he was given two months prior to that.  At that same visit in February, he was given a new target of 8.5% for our May visit.  Looking at all the data we've collected over the past 90 or so days, I thought for sure he was going to come in under that… not so...  8.7% today.  The nurses were thrilled and reminded me that for a 4 year-old the "gold standard", as they put it, is anywhere between 8.5%-9.0%.  The Doctor on the other hand seems to be of the same opinion I am - almost… but not quite.  I'm not entirely convinced that these tests are confined to a 90 day period - I've seen some indications in my reading that it's more like 120 days which means what was going on since his 9.4% in November is still in play.
On the up side, his trend is downward which is a good thing.  We’ll be going back mid-August for his next check-up and I think we're in a better position to get that 8 1/2.  We're leaving his meal ratios alone for now, but we're going to try out a new correction scale.  Currently his standard correction scale is >15.0 = +1ū, >20.0 = +2ū, >25.0 = +3ū, >30.0 = +4ū, and his night time and school lunch corrections are, >15.0 = +1ū, >20.0 = +1.5ū, >25.0 = +2.5ū, >30.0 = +3.5ū, just to be on the safe side.  We decided this morning to max out the capability of his pen for corrections at home (anything other than school lunch) by using a 1/2 unit scale.  We're going to start at ≥13.0 = +0.5ū and add 0.5ū for every 2.0 more (ex. 15 = 1, 17 = 1.5…) and see how that goes.  I'd really like to hit 8.0%, but as long as the number keeps dropping I'll be good with that.
We talked again about pumping and they insist that we're already doing all of the data collecting and analysis to enable us to easily transition over however, for some reason I'm still stuck on getting past the 1 year mark first.  That and I know I need to spend some time to do serious research on the options available.  I did find out though that omnipod is not available in Canada - our clinic had 1 patient on it, but they went to Michigan to get it and paid all the expenses out of pocket.  I still have some concerns about pumping, but I think it's likely we'll go that way in the near future.  I told them that if they have a pump with a CGMS that will send readings and error codes to my Blackberry and I can send instruction to the pump, then I'm on board.  I'm still concerned about infection at infusion sites and issues with insulin being prevented from making it to his body (kink, crack, etc…), but I have more of an open mind about it, especially after reading about some of my friends' pumping experiences (gotta love DOC) and I have little doubt that we'll at least give it a try.
Other than that, he's gained a couple pounds and grown almost an inch, still riding the 75th%ile curve.  He's had a little morning cough but that seems to come and go on allergy days since we don't give him anything for that.  All in all, not too shabby :)
Posted by Marc at 5/18/2010 05:31:00 PM 6 comments:

Day 7 - Dream a Little Dream: Life After a Cure 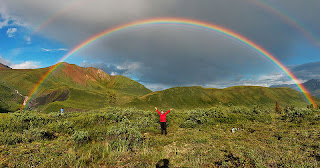 It's fitting that Sunday is the day that I write about our dream of a cure.  Every Sunday at church it is one of my top agenda items when I visit Him.
I find the thought somewhat overwhelming.  I get a little choked up if I dwell on it too long.  No parent wants their child to face this kind of burden and to think about the day when Jonathan would be free of this evokes some powerful emotions.
I think that when it does come, my blog post at the end of the day would go something like this:

I'd say I woke up this morning, but truth of the matter is I didn't really fall asleep in the first place.  Who could sleep? Today was the day that Jonathan was cured.  I was up all night trying to keep myself from running in the streets, shouting it to the world.

As we sat down to breakfast my brain fogged over as I prepared his injection and realized that it would be the last one I would give him.  After today I could simply pitch the kit into the trash and say good riddens.  I could barely bring myself to eat, I only had one thing on my mind.  We had a nice discussion about our adventures since his diagnosis and what we had all been through.  Even though one chapter was about to end, Jonathan's journey is not over, it's just going to get better.

When the doctor came into the room we were all there.  I started to get choked up, my wife started laughing at me and then I started laughing and she started to cry.  Alex thought we were weird and Jonathan was ready to get on with it.  The doctor administered the cure.  In a blink of an eye it was over and D was gone.  It was like a shroud had been lifted off of us and everything looked different.  It was like that first spring day when the grass looks greener, the sky looks bluer, and the birds sing louder.  It was a moment of pure joy.

After seeing the doctor, we went for a walk down by the river.  Alexandra and Jonathan taunted and chased each other to see who could annoy the other more, as siblings do.  When we got to the bridge, I reached into my pocket for his meter before realizing that it wasn't there anymore.  I felt an odd sense of loss as a purpose in my life was no longer, but knowing that Jonathan is now free far outweighed that and I didn't give it a second thought.

Before we knew it, mid-afternoon was upon us and we had totally missed lunch.  We were all famished, so we decided to check out a new buffet.  As I watched Jonathan load his plate with total abandon I just stood there in awe, knowing that a day ago I would have been freaking out.  I started to chuckle as I teared up again.  We filled our bellies and trotted off with a sense of euphoria.  In a way it was all new, but at the same time memories of pre-diagnosis came flooding in.  We spent the rest of the afternoon just meandering.  When we were all back home again we were wiped.  We sat on the deck with an ice crème cone and watched the sun go down.

The kids are in bed now and probably asleep.  I'm running on fumes, but I know that for the first time in a long time I will be sleeping straight through and when I wake up tomorrow my first thought will likely be about breakfast instead of a glucose number.