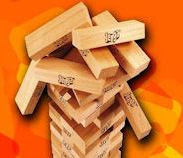 Preface: At the risk of repeating what most of us already know, I'm going to write this one anyway since I do this for myself as much as anyone else.
We used to play it all the time when I was living at home.  Frustratingly addictive, with little achievements turned into riotous celebrations and crushing collapses taken way to personally.  We'd build, slowly and steadily, just waiting for the inevitable….. and then - Jenga!
On the surface it seems deceptively simple.  18 layers of 3 rectangular blocks, each about three times longer than they are wide, with each layer rotated 90 degrees to the one directly below it.  Starting with a "solid" tower, blocks are removed from lower layers and placed on top until you either end up with a 54 level tower (very unlikely!), or a spectacular fall - at which point you have to pick up all your blocks and start over again.  There is a multitude of factors at play with the most obvious ones considered - perhaps without realizing it - being friction and center of gravity, as a loose block is removed and the tower sways.  Gingerly sliding the piece out of position and relocating it atop the pile, excitement builds with the height of the game while silent forces work against you intent on thwarting your progress; rotational speed of the earth, tectonic activity, atmospheric eddies, etc.  Finally, and without fail, comes the crash.  It may be after a few moves, or a longer while, but it comes eventually.  This is starting to sound familiar, and way too dramatic for a simple game of wooden blocks.
And so it is, at least in my take, with managing a child's Diabetes.  On the outside, for those who even happen to take notice, it seems like a simple matter of a five second test, some addition and division, and an injection - then all is well.  For those of us in the know however, we understand differently.  While the outward actions of management on average days may seem simple, the underlying elements are anything but.  We can test for blood glucose levels, tally carbs, divide for insulin, and attempt to adjust for activity, but we can't always account for physiology and other influences.  It's tricky enough just living with the tolerances and variability of our meters and nutritional labels, but there are so many factors unseen and/or undetectable.  Maybe there is a cold on the horizon that is already brewing trouble we can't detect, and quantifying stress responses is pretty much impossible.  As a group, we could probably come up with 101+ things that might be influencing our children's glucose levels, but a lot of them we know are out of our hands.
There are two ways to view the game (and I use that phrase for literary effect only, because this is not a game): Day to day, week to week, as we ride the glucoaster and work to keep as much straight track as we can knowing that stability in range is indicative of better health, but dealing with the curves and loops as they come.  As well we play in 90 day rounds, the success of which is determined at a quarterly visit to the clinic for an A1c check.  I know some medical professionals really drive home the feelings of success or failure based on that number, while others will take it as a lesson learned of things that work well and need to be continued or things that may not be keeping us on the straight & narrow and need to be adjusted, while minimizing the inherent celebration or admonishment.  Either way, it serves as a stake in the season to benchmark our upcoming months.  Whether we put more stock in the daily results, quarterly results, or regard both equally, we have the same objectives in mind - the best management possible.
Our tower is swaying right now, and we have about four and a half weeks before the next appointment.  As I review the last couple weeks of data and the trends therein, I see things are on the rise.  Lunch seemed to be a bit of an issue recently with regularly occurring pre-dinner highs, so we've adjusted Jonathan's lunch ratio to give an extra 1/2 unit of NovoRapid and it seems to be better, but still in the double digits.  Another review of the data suggests that we have a broader issue to address spanning the whole day, which would be taken up with his long-acting basil insulin.
As I write this, I am awaiting feedback from the clinic about adjusting the Lantus.  I'm thinking we'll end up with a full unit bump from 4-5, but in all likelihood they will recommend going by halves.  This is probably the prudent thing to do despite meaning double the nights of frequent checks; but deep down I know, regardless of my yearning for longer periods of sleep, I would probably do it one half at a time anyway.
With a little luck, a lot of patience, and some skill, we're going to re-center our tower.  This may mean it will lean the other way a bit too and we'll have to adjust again, but in the end we're moving onwards and upwards, one block one day at a time.
PS: I've since spoken with the nurse at the clinic (amazing group of people without whom I would not have my sanity by the way) and yep, 1/2 unit up it is.
Posted by Marc at 4/16/2010 05:11:00 PM 2 comments: 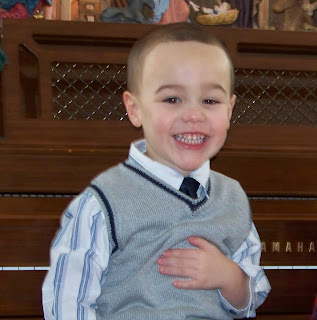 Music.  I'd like to think, is a universal language.  Like math or science, there is in music truths that are universal.  While a full understanding of music may take years of academic study, there is no requirement to be an A student in order to enjoy it.
Many of us have a favourite song.  We often associate events in our life with tunes that serve as sign-posts as we travel back in time in our memories.  We use music to celebrate, to mourn, to commemorate, to entertain, to relax.... the list goes on.  It can evoke deep emotions, and it can trigger exhilarating highs.
"Where am I going with this?" you may ask.  "What's with the philosophical dissertation about music on a blog dedicated to a diabetic boy?" you say.  It's about "D music".  Not music written in the key of D per se, but rather music that connects with diabetes.
You may have noticed that within the last couple of weeks, I've marginally expanded my HTML abilities and added a music player with a custom list to this blog.  The selections therein are not random or accidental; they, for me, have become D music and one way or another they are now and forever connected in my mind to our son.
And that's how my list of D music was started.  On one hand these songs will now forever be tied to a sad and difficult thing in our lives but on the other, they help keep me grounded and focused on what is really important to us.
If you have your "D music" I'd love to hear what it is and if you don't mind I might add it to my own, please feel free to do the same with mine.
Posted by Marc at 4/12/2010 08:24:00 PM 3 comments:

The little things get to me 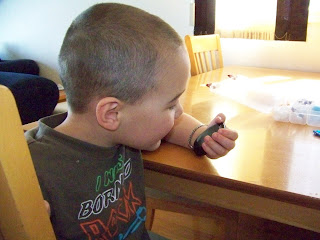 No doubt about it, Diabetes changes a family's life dramatically.  We all talk about a new "normal", and in a lot of ways a sense of normalcy does return.  We're coming up on 9 months now, and I know most people said it would take about a year, but things seem to be fairly "normal".
We try to have a clear definition between D-time and "normal"-time.  Obviously there are times that focus strictly on monitoring, management and treatment, but there is also a great deal of time that is about being a 4 1/2 year old kid, a son, a brother, and a friend.  I think I've come to terms with what we have on our plate even though from time to time it does drag me right down.
Something unexpected though really bothered me today.  We've been used to, for years now, the kids' plates being arranged slightly differently then ours.  Until recently, they liked their hot dogs to be bun-less whereas we like them in buns.  They prefer pizza cut into little pieces and we pick up the slice.  They have an aversion to the meat, veggies and rice of a stir-fry touching and we dump in into one bowl.  So, slightly different is already normal.  What stung me tonight while we were sitting down to an occasional favourite - chicken nachos - was that Jonathan has recently started expressing an interest in having his nachos piled up like ours as opposed to the chips, cheese, chicken and tomatoes all segregated.  Our little man wants nachos off the big tray.
I might have been able to count carbs by number of chips, but this is highly inaccurate, so I devised a little routine where I made a separate plate for him, with the chips pre-weighed, along side the main dish.  While this appeased him, it troubled me.  Something as simple as a family dinner just turned into a reminder of how far this disease has wedged it's way into his life.  It made me think of the discrimination and segregation that he'll likely face for years to come.  It reminded me of the emotional toll that this will take on him.

I know I can't dwell on such things lest my fragile sanity dissolve, but how cruel to go as far as stopping an innocent child from sharing in the family plate.  Maybe I'm blowing this out of proportion, maybe I'm just blindsided by something I took for granted, maybe both, I don't know, it just really irked me today.  He's a happy little guy, and I'm thankful for that.  I don't want to burden him any further with my frustrations.  Hopefully I'm right in believing that being diagnosed at such a young age he'll never really know how much his life change because for him, it will have always been this way.
Posted by Marc at 4/11/2010 07:56:00 PM 4 comments: