I don't wear high heels, but I do run too 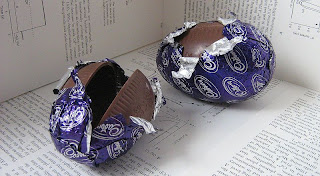 Growing up we had 3 holidays during which we rest assured that there would be no shortage of candy.  Obviously there is Halloween with the highest candy occurrence.  In third was Christmas, yielding a stocking full.  Smack dab in the middle... Easter.  That's right, every spring we awaited the arrival of a big furry bunny who would deliver little marshmallow bunnies, chocolate coated sugar eggs, jelly beans, and all sorts of other delicious treats.  And so the traditions continue with our children in the manner that most traditions are passed from one generation to the next.
STOP!.... WAIT!.... Time out here!  So, now, here we are with the second sugariest day of the year upon us and... shoot.  Ok, let's re-think this for a minute.
Rewind to three weeks ago: Somewhere in the second week of March as I strolled into the local Wal-Mart, I was immediately greeted with a blindingly bright pastel arrangement of giant constructs of crystalline disaccharide.  Oh my, the sugar.  It's sweet stench permeated every package and wrapping to change the very air I was breathing.  A little over the top?  Ok, I'll give you that much :)
Point is, for the first time since Jonathan was diagnosed I began to have a holiday panic.  Halloween was easy.  Run the kids for six blocks until they could barely carry their bags anymore, confiscate the loot, shovel them off to bed, and voila; a new day dawned and they were none the wiser that all of the candy was in a safe place to be doled out at a reasonable pace.  Christmas was even easier.  Distract them with something to open while the stocking gets shoved behind the couch until it can be properly secured.
Fortunately for us, thus far, neither kid has been a real candy glutton.  But here we are at Easter and aside from the religious aspects (how many carbs can there be in a communion wafer?) the bunny basket is the focal point of the whole production, and it's the first thing they see in the morning.  One out of 365 days every year, chocolate is (or was) a legitimate breakfast meal.
Fast forward to the days before the event:  So far this week, we've spent one night chasing an inexplicable high that insulin just couldn't seem to fix followed by a night that we were up chasing lows after a fun evening at Kid Fit, leaving 3 days to hopefully stay in the straight and narrow before we get wacky with the bunny's booty (the Easter loot for those of you needing clarification, lol).
There is hope though.  A certain measure of comfort being found in a creative solution.  While we can't necessarily control what happens where we go to visit this weekend and we know the variables will abound, we're going to pull a fast one at home.  This year, were trading out most of the candy for an egg colouring project and some extra little toys.  A little smoke and mirrors, and hopefully some luck, the kids will be none the wiser that there is in actuality only three Kinder Eggs in each of their baskets - each one with a known carb count and on par with a normal snack.
Phew, the panic subsides a bit.  Another holiday saved and the tradition lives on.  Well, that's the plan anyway - truth be known in about 72 hours how well our new normal is working out.
Posted by Marc at 4/01/2010 08:22:00 PM 3 comments:

I was totally understanding, and still am, of why Jonathan doesn't like his injections.  I would think that the vast majority of individuals that must routinely have injections probably don't enjoy them.  With this inherent dislike, combined with a 4 year old's take on the situation, it's totally understandable why he'd make some noise about his impending shot.

What I failed to understand though was, after a few months he was really good about getting his injections, in fact he rarely ever makes a fuss anymore unless he's already in a bad mood, but there is one exception - Lantus.  The mere mention of Lantus can make him cringe.  Lantus is the long-acting insulin that he takes for his basil replacement.  It's only given once a day, yet at every meal he asks if he has to have Lantus, apparently hoping the answer is "No".

Lantus, like his Novo-Rapid for bolus, is a clear colourless liquid in a 3ml pen-fill vial, but it's a completely different insulin.  It is also administered slightly differently.  Because Sanofi-Aventis' pens are graduated in 1 unit increments and we were doing adjustments in 1/2 units, we use a syringe to inject Lantus.  At first I thought that maybe the needles were different.  But they are both 32ga, and they are both made by the same company.  They appear to be relatively the same length.

After hearing more about some other insulin regimens and getting curious, I did some further reading and learned a little more about Lantus.  I'm no expert, and to paste everything I read here would make this by far my longest post yet, but the key thing I learned relative to Jonathan's extra dislike of this particular injection is that Lantus is formulated at an acidic pH of 4 (it is this formulation and the post-injection transition to neutrality that give it it's "time-release" effect).  To put this in perspective, pure water is neutral at pH7, tomato juice is approximately pH4.

Well now, this makes a little sense.  Lantus stings a bit.  I'm not sure if injecting myself just to find out how much sting is a good idea, but he stops protesting once the needle is in.

I wish it didn't have to be like this, and until it doesn't I will keep working on it, but in the mean time I'm glad it makes a little more sense.

A side note for Jonathan's grandmother who undoubtedly fretting over the torture she's inflicted upon him during his recent visits: A) This is not optional, he needs it.  B) He won't end up with long term psychological damage because of this.  And C) His injection is 0.04ml (it would take 123 shots to fill a teaspoon).

I guess in a way though, all of this is a form of torture.  Perhaps not in the traditional sense of the word, but undeserved pain and suffering none the less.  God we really need a cure!
Posted by Marc at 3/29/2010 05:21:00 PM 8 comments: