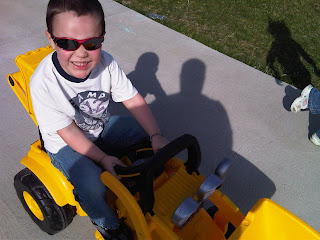 As they say, all's well that ends well.  I can only say that in regards to short periods of time as the chase never ends, but as our Easter weekend draws to a close I'm amazed that we had as little BG drama as we did.  The only thing I think we can really attribute it to is that Jonathan was outside playing a lot as it was a beautiful weekend; perhaps as well to a few little changes in the holiday events.  My family, extended family, never ceases to amaze me.  Not only were Easter treats kept to a minimum and in a centralized area that we could easily monitor, but those that gave him gift bags went out of their way to find treats more suited to his needs.  Most of our family couldn't take care of Jonathan on their own for any length of time right now (they just don't have the training ), but they all display a firm awareness of his situation and do their best to be considerate of it (thank you to all of you!).
It was about this time yesterday evening however, that I was quietly enjoying the notion of our holiday success, but not long after it looked like we were in for another ride on the glucoaster.  He was about 12ish (~220) when he went to bed and 10 (180) at 4 hours after dinner - pretty average.  Typically we expect he'll stay about there ± 2 (36).  Normally I'd have let him go through the night, but since I was up for about an extra hour or so watching a little TV, I thought I'd check him one more time before I hit the sack.  20.3! (365)  Damn, we were so close.  There was no apparent reason for the spike other than perhaps stress.  He did NOT want to go to bed.  And to make matters worse, he took a bump to the noggin when I closed the hatch on the wagon when we got home.
Usually I don't wake him up for testing and injections at night, but I was doubly panicked now.  Thankfully he woke right up and gave me the same "go to hell" look that I give others when I'm woken from a sound sleep.  But I knew that was a good sign.  So a unit in at 23:00 and down to 17 (206) three hours later.  I decided to be a little less aggressive last night and let him coast down slowly.  He was still a little high at breakfast so we bumped up his bolus, but the rest of the day was stellar, so much so that there was a trip to the park, ice creme, and afternoon of play and he still rocked the dinner check. :)
And so, "one more sleep" as the kids would say, and it's back to our "normal" routine.  Easter was a non-event (D wise) after all.  And aside from being a little warn out from the long weekend, he's no worse for wear.
Posted by Marc at 4/05/2010 07:09:00 PM 2 comments: